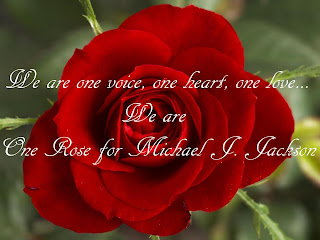 It is with great joy and happiness that I am able to publish again this year that "One Rose For Michael J. Jackson" will again take place.  Once more thanks to the commitment of loving, caring MJ fans who have worked diligently to make this a reality for Michael Jackson and Michael's loving fans around the world, we will again be honored to blanket Michael with LOVE in the form of a sea of red Freedom Roses.

♥  Michael's fans will continue our shower of red roses over Michael's resting place at Forest Lawn, Holly Terrace this year for the 4th anniversary of Michael's passing.

♥ Thrilling red roses everywhere for Michael Jackson at Holly Terrace to honor him on the anniversary of his death, June 25th, 2013.

♥  Thanks to Robyn and Sarrah for all their incredible, hard work in making it possible for MJ fans around the globe to continue to show our LOVE to Michael in this most spectacular way on the June 25th anniversary each year since his passing.

♥  Each year this has proven to be an amazingly beautiful and vibrant statement of LOVE to the world that Michael will ALWAYS be LOVED beyond measure and will ALWAYS be in our hearts, NEVER forgotten. 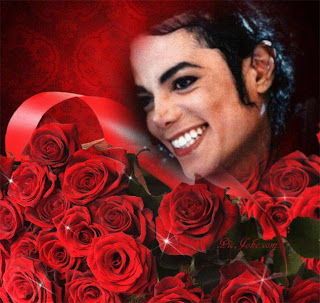 We continue to rise above! LOVE wins!

PLEASE NOTE: Like last year the calculated cost per rose includes fees, money conversions, trucking costs, taxes and other costs. Once the mentioned fees are deducted any left over balance will go towards the purchase of more roses.

MJ fans can now buy your rose(s) via paypal:

4. In the box that says ‘To (email or mobile phone) enter: onerose4mjj@gmail.com

5. In the box marked ‘Amount’ enter the total amount in USD you are sending. Each long stem freedom rose is $3.00. To calculate the total amount of money needed to purchase your roses, multiply the number of roses you’d like to purchase by 3. You may also refer to the chart below:

- Once you have purchased roses then you will receive an email with the subject line: Purchase Verification-OneRose4MJJ.

- Please follow the instructions enclosed in that email to have your message to Michael and personalized rose badge published to the memorial blog!

- The email from the #OneRose4MJJ team with provide further instructions for sending your #MessageToMichael, so that it may be published to our memorial blog along with your rose badge.

♥ Attention: All messages to Michael that members want posted to the memorial blog should be sent to: onerose4MJJ@gmail.com

Once you’ve submitted your message via email #OneRose4MJJ it will be posted for you to the memorial page, but give us at least 24-48 hours for it to appear on the memorial site. You will receive an email notifying you when your message has been published, and will be provided a link to your message. You will also be sent your personalized rose badge at this time to post on your wall or keep in your files as well! 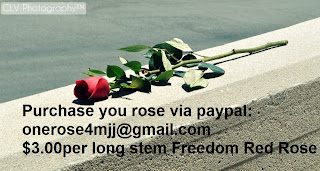 ♥ Again this year with the purchase of your rose(s) you will receive a beautiful personalized badge for posting and sharing or to save for personal memories to your files: 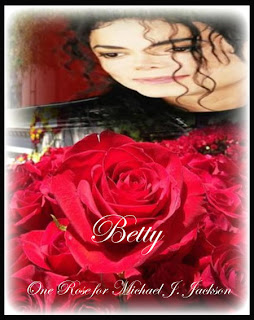 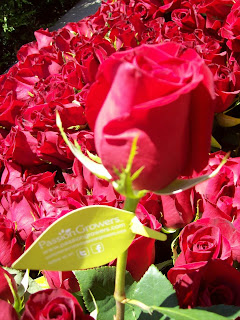 "To give someone a piece of your heart,
is worth more than all the wealth in the world.”
~ Michael Jackson


♥ One Rose for Michael J. Jackson - Pay It Forward:


Also we are once again privileged to "Pay It Forward." Last year MJ fans delivered many buckets of roses to surprised, homeless women veterans at a Los Angeles Veterans woman's shelter. It is with great joy that we are able to share the wonderful consequences of our act of LOVE. As a result of this giving gesture of LOVE in Michael's memory a seed was planted in the heart of an anonymous person present that day who witnessed the joy and appreciation the ladies experienced as they embraced their roses.

Our simple act of generosity grew exponentially as this anonymous donor personally took it upon themselves to continue the gift of flowers to the women veterans by generously delivering flowers every month after June 26th for the entire 2012 year. The smiles and LOVE grew and grew all year long with these regular flower deliveries. What an incredible thing! I am so proud and appreciative to be a apart of such a beautiful expression of LOVE. I do believe Michael is smiling down from heaven above.

Thank you to everyone who bought roses last year as you can hold in your hearts that you were also apart of this beautiful, loving gesture as we "Paid It Forward in Michael's Memory."

Flowers were also taken last year to Baby Land and Lullaby Land at Forest Lawn, Glendale. Where Michael's Holly Terrace over looks the babies buried there. This is a perfect way to show respect and honor to these little souls whose parents and families no longer visit. This is the one time of year that flowers are showered down on them as well... in Michael's memory as we "Pay it Forward."

Sparrs Senior Center in Glendale was thrilled to be gifted with buckets of red roses for seniors to enjoy as they ate their meals in the cafeteria stage area. Sparrs reaches out to both Seniors and young children as a social gathering place and Performing Arts Community Center. This made it the perfect place for our rose donation in Michael's memory. The buckets of roses much to our delight were placed center stage right where Michael will always belong. ♥

Excerpt from a Face Book post by Robyn Starkand:
"We will again this year pay the love forward in Michael's name donating the roses on June 26th to less fortunate people, bringing them joy and love, also included in this we will be bringing buckets of roses to Baby Land and Lullaby Land at Forest lawn as we did last year.... Michael will again be smiling down on us for continuing his message of love."
Thank you all for your love and support,
One Rose for Michael J. Jackson 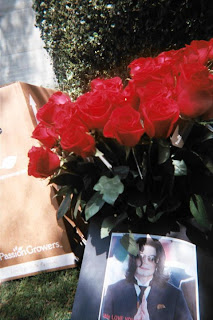 ♥  PASSION GROWERS Philanthropy ♥
This company is so much what Michael was about. They continually reach out and give back to the community helping the sick children and those in need. They have worked with Robyn Starkand and gone above and beyond to make this project possible for MJ fans around the world to show their LOVE or Michael on the 3rd anniversary of his death. Please go to this website to see the efforts of LOVE and healing they share with the community at large throughout the year: http://community.passiongrowers.com/category/philanthropy/

With a Child's Heart 2013 - Tribute to Michael Jackson Roses and Charities...
Keeping Michael's message of healing the world alive. If you prefer to donate to charities or also would like to donate to charities there are three very meaningful charities set up via One Rose for Michael J. Jackson in MJ's memory. You can confidently donate in MJ's memory to any of them.  Its all for LOVE ♥

Along with finding the One Rose charities at this link businesses, websites or pages can donate by matching rose donations on this website in MJ's memory.
Remember, as of this time for every 1,000 roses purchased:
MJJusticeProject, Stop Global Airwave Abuse, MJ fans of Montreal, MJ fans of NY and Justice4MJ Always will be donating to the three One Rose for Michael J. Jackson charities matching set amounts of roses for each of their donations... taking our gesture of love and paying it forward!

For those who would rather give to a charity in MJ's memory you can also find the info about all three wonderful charities set up via One Rose for Michael J. Jackson on this You Tube video. Donate with confidence at the urls provided in the clickable links under this video on You Tube. All money given is direct to the charity in MJ's memory.


"To give someone a piece of your heart, is worth more than all the wealth in the world.”
~ Michael Jackson
(Donner à quelqu'un une partie de son cœur vaut plus que toutes les richesses du monde)

MJBliss
**ALL RIGHTS RESERVED Thank you for respecting my work. ©Michael's Heart, MJBliss, Copyright Act, Title17 of the U.S.Code. At NO time may any portion Michael's Heart blog be copied or used in part or full without prior consent from me, Betty Byrnes (MJBliss.) Thank you in advance for your cooperation. Feel free to share the links at any time.*** Since Michael Jackson’s death as fans around the globe collectively reached out via the internet to share their grief, the Lord laid heavily on my heart a need to write. This calling from the Lord was to go out, visit places where Michael Jackson lived, shopped, ate, visited, where he had been laid to rest. That I should go ask questions from those who knew him or met him, learn more about MJ, share it globally. Share my ‘Michaeling’ experiences, as this adventure has come to be known. In hope that possibly people may attain some sense of healing. I am thankful and blessed to have learned from fans around the world that this has been the case.

Check out these websites and the MJFSC Face Book page.